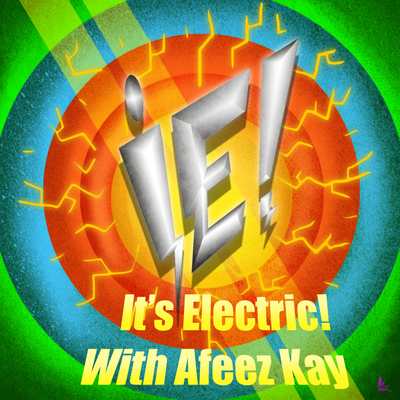 The Power of Rideables with Jassem Ahmed

Welcome to It’s Electric hosted by Afeez Kay - the most flavorful and exciting podcast around all about electric cars. Afeez’s passion for these types of vehicles springs forward into a life of its own through your speakers. This guy really knows what he’s talking about. Having owned several different makes and models he has a well-rounded knowledge on what makes a good or not so good electric car. With Afeez you’ll never be bored and you’ll always come away with more knowledge than when you started.   In this episode, Afeez welcomes National Health Systems (NHS - UK) Performance Consultant Jassem Ahmed to the show. Jas tells he become interested in electric unicycles/cars while looking for a different way to commute to work in London. He saw a video of Afeez online with a Ninebot and which caused him to fall into a dark YouTube rabbit hole of video after video about electric unicycle/car(s). Not convinced that he needed an electric unicycle, Jas purchased and a electric scooter and was dissatisfied with it’s performance. It did not satiate his hunger for a good alternative to taking the train to work. Why? Poor maneuverability Weight Speed Power Convenience of carry   Jas explained that he found a Facebook group and recognized Afeez as an administrator. Luckily, Afeez offered Jassem the experience of trying out the cycle and training with him personally. He tells a funny story about standing in his living room practicing leaning forward and backward “looking like Michael Jackson”. Quickly he realized that it takes a lot of muscle from different muscle groups to operate the vehicle efficiently. The cost, convenience, and of an actual car was not worth it. The only downside is that it is a personal vehicle; you can’t bring people with you or go on big shopping trips.   Jassem talks about different phone applications and companies that can be used for mobility around the city of London. Turo: No gas cost No charging cost No insurance cost No cost while parked   ZipCar Flex (All electric) r: Good for hourly needs Specific pick up and drop off locations Cheaper than a cab   Drivey: Rent out your car Unlock with phone Gas sensor Covered by insurance Book for twenty-four hours Must pay for gas Lime: Scooters Bicycles Get paid to charge before returning   Are personal cars necessary any more? Maybe not because of car sharing, but some places do not allow these businesses. So the world isn’t to the point that we can eliminate cars quite yet.   Jassem tells a funny story about the police officer speeding up to point at the wheel he was driving.   Afeez and Jas talk about how electric vehicles aren’t currently governed in the UK. There is no law on the age of a person purchasing them. There are no laws on helmets, pads, lighting and other important things regarding their use. When Jas talks about opening up his own shop, he says he would not sell to minors. Afeez agrees it’s important that these vehicles be governed and he thinks that the governing body could go far by involving people like himself in that process.  Afeez and Jas discuss what they think should be required: Helmet Highly visible jacket Safety gear license/training “Using any rideable causes a change in your lifestyle.” “Rideables are fun!” “We’re still in an archaic fossil fuel era.” “Laws are man-made and based on a particular timeframe.” “[As a rider] what legislation do you think should be in place?”   Afeez's Facebook Profile Afeez YouTube Channel It's Electric Facebook Profile Jassem's LinkedIn Profile